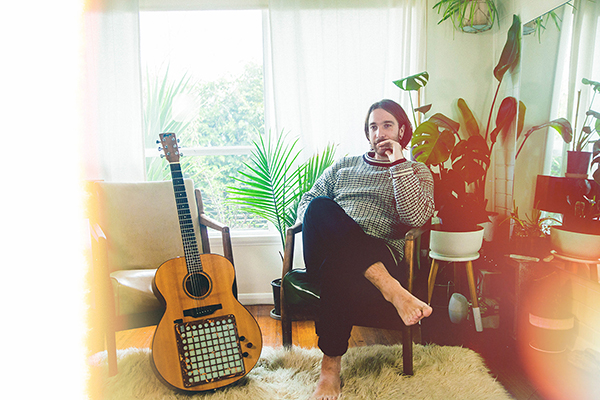 Zoltan Fecso is a musician and composer, known for his live performances on an augmented guitar built by luthier Ian Noyce. Zoltan’s compositions are created by combining small fragments of single notes repeating at varying speeds, inspired by ‘pointillism’, a painting technique using individual coloured dots to create images.

He has performed and given talks on music technology in Amsterdam, Berlin and London, as well as nationally at Arts Centre Melbourne. In 2017, Zoltan was accepted into the Bundanon Trust Artists in Residence Program, where he began to examine the idea of limitations in his creative practice.

The Pointillist understanding of colour theory to create shimmering and pulsating imagery inspired Zoltan’s approach to composing. By interpreting the pointillist properties of colour to the properties of sound, Zoltan is able to explore note relationships as they are placed against one and other. Slow, sparse note cycles combine into melodic phrases and shift with each pass, as the notes intersect at different times. Fast repetitions make individual notes harder to detect, forming shimmering soundscapes.

In August 2018 he made his label debut under his own name, Zoltan Fecso. The album ‘Shimmer Raga’ is his most “honest and self-reflecting work” - critiques Alex Ruder (DJ and Assistant Music Director at the influential radio station KEXP and Founder of Seattle’s Hush Hush Records).

The title and artwork for the album Shimmer Raga were acquired from a painting by the artist Claire Lefebvre, whose work deeply influenced the creative process.

"Striking attention to detail that slowly reveals the beauty in its ambiguity..." - The Slow Music Movement

Marble Rain is Dutch multi instrumentalist, producer and composer Julien Mier and Australian foley artist and pianist Miki Takahashi. With their live improvisation based performance they aim to create a surrealistic dream type sound scape and sonic film for the listeners. Inspired by the palette of the timbre of many different objects they travel and re-contextualize a variety of found and lost objects they have collected over the years.