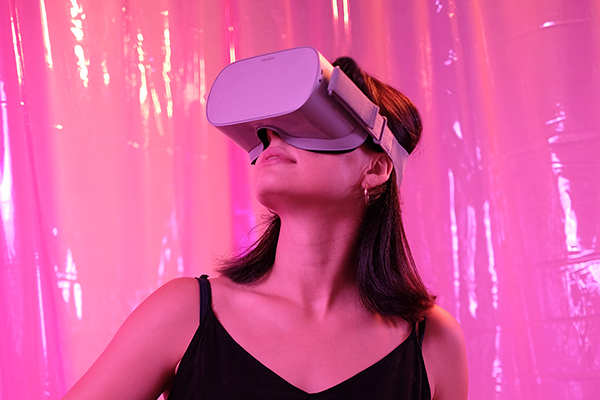 In Hearn's latest SOLO show at 107 Redfern, the viewer will venture through the gallery, encountering a single channel performance video ‘Lands bride’, followed by large scale paintings, and finally into the Virtual Reality installation box, constructed of pink transparent vinyl. Once inside the box, they will be able to put on the Virtual Reality headset where they will be immersed in the 360 world inside the work ‘Bang Bang Bang’ - a performance video about a group of women restoring the lost matriarchy by overthrowing a Lifeguard King.

Hearn addresses the gallery space experience with layers, much like the multidimensional layered nature of her work. Moving through the gallery, the viewer is moving through, or down into, the layers of self, of woman and into the psyche.
The over use of the colour pink is a tool to bring attention to the imposition this colour has placed on women and all that the colour represents in society.

She is also interested in ritual/the lack of ritual in western culture. Her work looks to create new rituals and constructs which serve women, and create platforms for self identification, allowing subversion of societies expectations or impositions, It is a space that allows for individual expression.

The idea of place, trauma and history, is also present in her work, and how it connects to the body and sense of identity.

The single channel video ‘Lands Bride’(2018) is shot on location in drought affected Duri, NSW, where both her grandmother and her mother lived and where many years of farming women have experienced trauma and drought. The memory that lives within that soil and her body represents the farming women of that land along with her own individual connection to that soil and the traumas it holds in her own family history. It is a somewhat ritualistic performance, making peace with that place and all that a rural country town imposes on women. Hearn's paintings are a further depiction of these explorations.

Continues until Sunday 5th May.

Amber Hearn is a multidisciplinary Sydney based artist, originally from regional NSW with her early days spent in Papua New Guinea.
Amber received a Bachelor of Fine Art (Honours) from The National Art School (NAS) Sydney in 2014. Her practice engages the fields of Painting, Sculpture, Installation and Performance Video, including Virtual Reality.

She is the sole founder and curator of the ‘Crossing Borders’ refugee fundraising annual project which has run in partnership with The National Art School (NAS) since 2014, raising money for Refugee Advice and Casework Service (RACS) to continue providing free legal services to people seeking asylum in Australia.

Her work explores a sense of discontent with the future, the nature of ‘being’, human experience/connection/lack of connection and imposed roles on being a woman, embodied in her most recent Virtual Reality Video, Bang Bang Bang (2019).

Her performances utilise her body as a vessel in a poetic manner to explore and subvert ideas which are both personal to her yet universal in nature such as identity, imposed gender roles and constraints of the physical body and the sensual nature of ‘Being’ and experiencing life based on the individual’s perception and the senses, which is influenced by so many societal constructs.